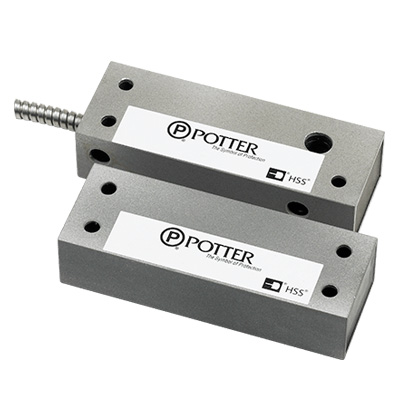 Experts agree that the most devastating threats to government and corporate security have come from employees who were deemed trusted insiders. Armed with simple magnets, unscrupulous insiders can disable even triple-balanced BMS magnetic contacts while the system is unarmed, and enter undetected at a later time, leaving no evidence of tamper.

The P2 High Security Switch (HSS) combined with Magnasphere technology meets the UL 634 Level 2 High Security Standard. The P2 HSS meets standards for use with SCIF and all other High Security Applications. The P2 HSS is resistant to external and internal magnetic defeat. In addition, the switch resists permanent contact welding due to lightning, power surges, or stun guns.

In addition to the sensors inside that will detect the presence of a stronger defeat magnet placed on any surface of the HSS, the removal tamper circuit will alarm before the HSS can be removed.

The construction of the HSS devices incorporates robust, hermetically sealed Magnasphere switch technology as well as complete epoxy encapsulation of all electrical components and magnetic actuation. This allows the HSS models to conform to the requirements of UL 913 and be used as an intrinsically safe simple apparatus device in hazardous locations. The P2 HSS devices must be used in conjunction with an intrinsically safe barrier.

Creative design of the P2 HSS switch itself eliminates the need for L or Z brackets.

Your request was successfully submitted.
We will get back to you with a quote shortly.

Your message has been successfully sent!