What Are Winter-Ready Security Cameras (and Does Your Facility Need One)?

What Are Winter-Ready Security Cameras (and Does Your Facility Need One)?

Despite the relatively mild start to winter in most parts of Canada, this time of year typically pushes outdoor security cameras to the limits—causing some to fail under the freezing temperatures and barrage of snow, wind and ice. Unfortunately, even a momentary lapse in functioning could spell the difference between a successful resolution and a costly break-in or case of damage that goes undetected.

Here are some important things to consider when choosing outdoor security cameras for your business or facility.

Not all cameras designated for outdoor use offer the same level of protection against the elements. It doesn’t help that manufacturers use terms like “weather resistant” and “weatherproof,” which can mean different things to different people.

As a general rule, though, a weatherproof security camera is able to withstand more difficult conditions than a weather-resistant camera. This subtle distinction can quickly become magnified once snow, rain and dust begin to fly, putting the camera’s seal to the test.

If you don’t want to risk your investment in an outdoor surveillance system, opt for “weatherproof” over “weather-resistant.” But don’t stop there. Get a more detailed comparison by crunching a few simple numbers.

Ingress Protection (IP) is the rating system behind terms like “weatherproof,” and it should be one of the first specs you look at when shopping for an outdoor security camera. Although not as sexy as the number of megapixels or optical zoom, the IP rating provides very important information, especially if you expect that camera to perform under some tough weather conditions.

Thus, a security camera with an IP68 rating provides superior protection over a camera with an IP66 rating. Although both would be well suited to outdoor use, the first camera’s enclosure has a tighter seal than the second’s.

Weatherproof housing is valuable all-year round, but that doesn’t necessarily make a security camera capable of enduring a Canadian winter. For that assurance, you’ll want to look at operating temperature. Specifically the low end of the spectrum.

You will find some outdoor security cameras that are able to endure temperatures as low as -40°c—all while continuing to deliver precise video.

Operating temperature is provided as a range, so make sure that your outdoor security camera will be able to function at the lowest listed temperature, even if it only amounts to a few days a year. Of course, it also helps taking into account yearly fluctuations, exposure and other factors.

On the extreme end of the spectrum, you will find some outdoor security cameras that are able to endure temperatures as low as -40°c—all while continuing to deliver precise video. These “extreme weather” cameras also remain functional at higher temperatures, for versatile protection that works 365 days a year.

To maintain a sharp picture during the coldest months of the year, some cameras have added features like a built-in heater. These features not only protect sensitive electrical components and stop batteries from failing in wireless cameras, they also help maintain image clarity by preventing the lens from fogging up. 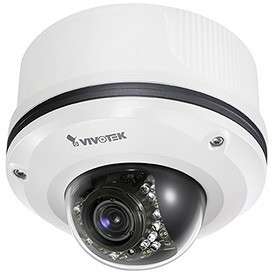 As with products like the VIVOTEK FD8361 Day and Night IP security camera, the built-in heater and fan are PoE-powered.

With the wide range of security camera features and capabilities available today, it can be difficult to know which product is right for your facility—now and in the long run. Talk to a video surveillance specialist at ABC for help balancing your security needs with your budget.