Retail Loss by the Numbers

Retail Loss by the Numbers

As consumers and stores gear up for the busiest shopping season of the year, retail loss prevention and security systems will be put to the test across the world. This comes as The Global Retail Theft Barometer just published some key findings from its annual survey, including a jump in shrinkage for U.S. retailers.

Here are a few highlights from the 2014-2015 survey, which gathered responses from retailers in 24 countries:

The report also recommended a series of retail loss prevention tactics, including the use of internal data to get a clearer picture of shrinkage and a mix of solutions to prevent theft. Manual approaches like better employee screening and training are two such solutions, but retailers are also encouraged to strengthen security through technology, including video surveillance.

Nearly 40% of retailers in the U.S. increased their loss prevention budget in 2015

According to the National Retail Federation (NRF), nearly 40% of retailers in the U.S. increased their loss prevention budget in 2015. Still, almost 25% of respondents decreased spending, and it’s not hard to imagine why given the competitive retail landscape.

Statistics suggest that retail shrinkage can come from a variety of sources, just as many different kinds of items can be targeted for theft. According to the National Association for Shoplifting Prevention (NASP), men and women shoplift almost equally, and 75% of shoplifters are adults.

As a business owner or store manager, that makes it even more challenging to protect inventory.

Fortunately, a number of technologically advanced and user-friendly products are available in the field of retail loss prevention. At ABC we understand the unique challenges faced by retailers, from tight budgets and compliance pressures to high rates of employee turnover.

Our products are designed to simplify and strengthen retail loss prevention systems, so you can focus on more important things like customer service.

eCylinders: An Easy Way to Take Charge of Your Retail Security System

According to a National Retail Security Survey, supermarkets and grocery stores face a higher rate of shrinkage than other kinds of retailers. Employee theft makes up the majority of that shrinkage, even more than shoplifting.

Part of the challenge is trying to control access to restricted areas and hold employees accountable while using a low-tech, mechanical access system. In many cases, employers have issued so many keys and are managing so many workers they’re forced to manually rekey the locks on a regular basis, which is costly and inefficient.

But taking charge of your retail security system might not be as difficult or expensive as you think.

Bridging the gap between high-tech and mechanical access systems, our eCylinders from Medeco provide a reliable, cost-effective and convenient way to guard against retail loss and liability. These easy-to-install, retrofit locking systems combine a number of intelligent features while still delivering the kind of superior physical security that retailers and facility managers rely on. Upgrading is as easy as replacing the cylinder itself. 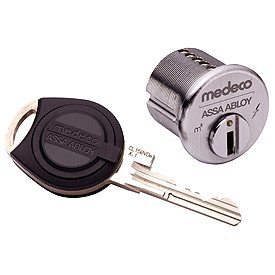 One of the more attractive features of eCylinders is the ability to quickly add or remove a key from the system electronically—something particularly helpful if you’re dealing with high rates of employee turnover. eCylinders also let you control door access according to a programmed schedule and keep track of every event, thanks to the recording of audit information in both the lock and key.

Taking it a step further, integration with Aperio™ Technology makes it easy to expand a traditional hard-wired access control system to include wireless cabinet locks, display locks and more. 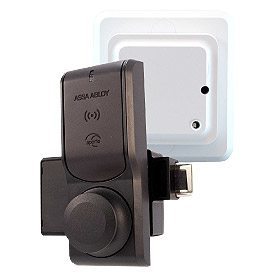 The HES K100 wireless cabinet lock with Aperio Technology makes it easy and cost effective to bring real-time access control to cabinets and drawers where audit trail and monitoring are increasingly critical.

The Enduring Popularity of Brick-and-Mortar Stores

Even as commerce moves online and crime becomes more sophisticated, especially with the rise of cyber-scams, retail loss remains a challenge for store personnel. You might never be able to fully eliminate your exposure to retail shrinkage, but you can mitigate risk by investing in the right security products and the right people.